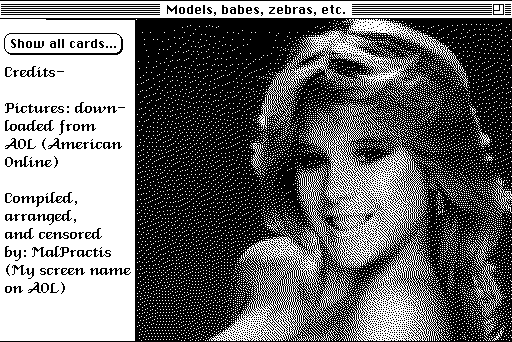 This is a collection of my favorite female pin-ups I have collected over the years and put in hypercard formatt for easy access. Some really nice pictures.
-Complies with AOL nudity policy.

Reviewer: tmg6pu - - December 14, 2021
Subject: Models
The Hypercard was created in 1993 by AOL user MalPractis. The pictures were dowloaded from AOL. The cards consist of a variety of models. I think the cards were intended for a male audience and came up around the time when porn was also first making its way to the web. It is still very censored compared to what is seen on the internet today. You could women wearing this little of clothes simply by scrolling through Instagram today. I think this card was created at a time where women wearing minimal clothing was much more taboo and Hypercards like this must have been seen as much more scandalous
Reviewer: nas2ayu - favorite - December 14, 2021
Subject: "Models"
The HyperCard stack that I analyzed was named Models. The file that I clicked on was named models, babes, zebras, etc. It was published by a user named Bob Crawford on June 13th, 1993. I assumed this HyperCard would be of beautiful models, and the change of fashion and appearance over the years. This stack is a collection of young models in swimwear. Based off of these photos I would assume the targeted audience are young, straight males. That these photos were probably used for personal attraction. The intro page shows a young beautiful blond, and then a click icon to see more cards of these models. You are then present with images, one by one, with women in very little clothing. There is a scroll down button that can be pressed to see the whole image. Then you use the go button at the top ad hit the next button to see the next image. You can also use the home button or back button to escape out of the HyperCard. However, you must hold down on these commands in order for them to work. I would not personally recommend other users to use the HyperCard, as I see no use but the sexualization of these women.
Reviewer: cdg4ztj - favorite - December 2, 2021
Subject: Disappointed, but not Surprised
I chose to engage with the HyperCard Stack, “Models,” published by a user named Bob on June 14, 1993. I was initially drawn to this stack due to its title and cover photo, assuming it would be some sort of catalogue of American models from the 1990s or perhaps even an interactive runway experience. Instead, I was greeted with a very rudimentary program that just allows users to scroll up and down a photo of a toned model’s body, dressed only in a bikini. I believe this HyperCard Stack to be a form of early, online-appropriate pornography that appeals to a primarily young, heterosexual, male demographic. However, I could also see this program being used by women who were seeking fitness inspiration in a time when beauty standards were shifting to a more athletic and toned physique. In both scenarios, the purpose of the HyperCard Stack is purely for visual consumption and the personal pleasure of the user. In all, I would not recommend this Stack to others as it is uninteresting, misleading, and perpetuates the continued objectification of women in the media. In fact, I think this program is a better example of what to avoid rather than what to seek out as one explores HyperCard Stacks. Unfortunately, I do not think the erotic nature of this Stack has disappeared from modern online programming, but perhaps the tactics of sexualization have just become less obvious over time.
Reviewer: esl5tak - favoritefavoritefavorite - November 30, 2021
Subject: Review for Models
I decided to engage with the Hypercard Stacks, "Models," written by a creator named Bob Crawford on June 13th, 1993. When clicking on Bob Crawford's page, I found that he had also created a number of other Hypercard stacks. Upon opening the stack, the home page scrolled through a series of images featuring a number of female models. Many of the women were posing in striking poses. I believe that this Hypercard Stack was meant for male audiences in a near-pornographic manner. I recognized some of the women in the images, including Brenda Song and other female models and actresses. The title card to the left of the images notes that the Stack was downloaded from AOL, which I found particularly interesting considering the significance of AOL during the early internet (as we learned in class). Although I found this stack to be interesting, I wouldn't necessarily recommend it to my female classmates — as it does objectify women
Reviewer: lexi2364 - favorite - April 27, 2020
Subject: :(
The title of this stack was just "models" and it was created by a user identified as Bob in 1993. I thought it would be an interesting stack explaining some history of certain major models, but it ended up being some 90s porn-esque photos of them in tiny bikinis and that was all. I should've known better than to expect a boy named Bob to post a respectful piece about women. It is my fault for expecting more. The stack consisted of different models in bikinis. This is pretty disappointing, I wouldn't recommend anyone else look at this stack for any intellectual content, but if you want to see women in bikinis, go for it!

Uploaded by HyperCard Online on August 11, 2017